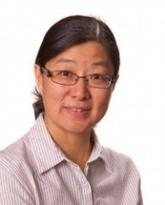 Research interests are in the applications of laser analytical and spectroscopic techniques. Of particular interest is the investigation of the structures, energetics and dynamics of radicals and intermediates formed in the processes of Hot Wire Chemical Vapor Deposition (HW-CVD) of semiconductor thin films. HW-CVD is a new technology to produce device quality silicon-based thin films, which are found to have large potential in low-cost optoelectronic devices (e.g. solar cells) and thin film transistors. A lot of effort has been made to understand the mechanism of thin film growth in HW-CVD, however the processes remain poorly understood. It is our goal to provide insight into the fundamental chemistry and physics involved in HW-CVD processes and to apply the scientific findings to optimize the thin film formation process to get superior quality films in industrial settings.

For a complete list of presentations and publications, please visit the IQST archival site.