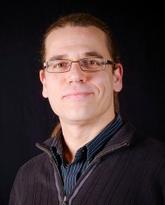 An atom is a boson or a fermion if it has an even or an odd total number of electrons, protons, and neutrons. Quantum degeneracy in atoms occurs at very low temperatures or high densities, and for bosons corresponds to a transition into a Bose-Einstein condensate (BEC). The BEC is a new state of matter, produced in the laboratory by cooling alkali atoms to the coldest temperatures ever achieved, around one billionth of a degree above absolute zero (the 2001 Nobel prize in physics was awarded for this achievement). One can think of the BEC as a single quantum mechanical wavefunction, that can be easily poked, prodded, and photographed.

David is mainly interested in the superfluid and nonlinear/quantum optical properties of ultracold atoms, and how these may be exploited for the construction of rudimentary quantum information devices. These gases make good contenders for the implementation of quantum logic: the internal atomic states maintain their coherence for long times; the interactions between atoms are inherently quite weak but can be made very strong by the application of magnetic fields; and the gases themselves are inherently isolated from the outside world, yet are easily manipulated using magnetic and optical fields.

David is currently exploring several approaches to quantum computing, including placing the atoms in optical lattices, and by rapidly rotating the trapped atoms so that they undergo a transition from a superfluid to the neutral analogue of a (fractional) quantum Hall state. The work is being carried out in close collaboration with various experimental groups. David is a member of the Atomic, Molecular, and Optical Physics group.

David Feder is an associate professor in the Department of Physics and Astronomy at the University of Calgary. He obtained his MSc and PhD in theoretical condensed matter physics from McMaster University, studying anyon systems and high-temperature superconductivity. After working with Alexander Fetter at Stanford University on Bose-Einstein condensation, he devoted his postdoctoral studies at the University of Oxford and the University of Maryland, College Park to ultracold atomic systems. He joined the University of Calgary in 2002. David\\\'s research is at the interface of condensed matter physics, atomic, molecular, and optical physics, and quantum information theory. Areas of investigation include quantum-walk, measurement-based, and topological approaches to quantum computation, and exotic phases in quantum many-body physics.

For a full list of publications, presentations and more, please visit the IQST archival site.