Emeritus professor and mathematician Dr. Richard Guy passed away on March 9, 2020. He was a teacher, colleague, philanthropist, mountaineer, and treasured friend who will be greatly missed and fondly remembered.

Passionate about life and learning, Richard held many roles and was a pillar of the community since he arrived in Calgary in 1965 alongside his beloved late wife, Louise. He and Louise supported the University of Calgary since its beginnings as a new university in 1966. They dedicated themselves to sharing their zest for life and Richard’s love of mathematics with students, colleagues, and the community.

>> Learn more about his extraordinary life

As a mathematician, Richard was a world-renowned combinatorist and graph theorist who made profound and important contributions to pure and applied math, and to the early years of computer science. He published over 300 scholarly articles, with one notably holding a record for the greatest age gap between co-authors. Though he was undoubtedly preeminent in his field, he strove to make mathematics accessible to all. Through his own efforts and some personal funds, he and Louise worked with the Strens family and the Government of Alberta to bring the Eugène Strens Recreational Mathematics Collection to the University of Calgary library. Another of the couple’s lasting contributions to the University of Calgary is the popular Louise and Richard K. Guy Lecture series, which was a 90th birthday present from Louise to Richard in recognition of his love of mathematics.

Richard marked his 103rd birthday on Sept. 30, 2019. Although he retired in 1982, Richard insisted, “I didn’t retire. They just stopped paying me.” Even as his age entered triple digits, Richard often spent five days a week at his office in the Department of Mathematics and Statistics.

The University of Calgary celebrated his 100th birthday and its 50th anniversary milestone year in 2016. We could not be more proud that the inspirational, incomparable Richard Guy chose to share part of his life with us.

The Faculty of Science mourns the loss of Richard Guy who passed away on March 9, 2020.  We encourage you to share your fond memories of Richard.  Your memories will be posted on this web page.

From October 1-4, 2020, we presented a series of events which celebrated the life of Emeritus professor and mathematician Dr. Richard Guy.  He was an inspirational teacher, colleague, philanthropist, mountaineer, and treasured friend who will be greatly missed and fondly remembered.

Those interested in making a gift in Dr. Guy’s honour may contribute to these initiatives.

The life of Richard Guy

Photos courtesy of Chic Scott and Louise and Richard Guy. 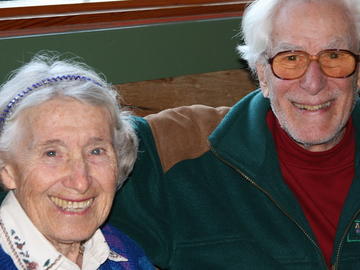 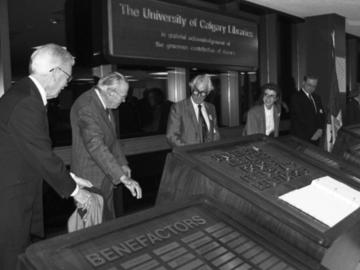 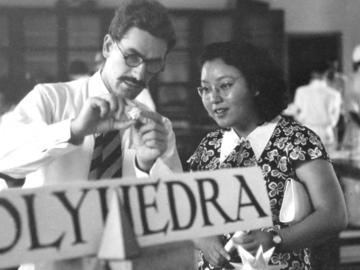 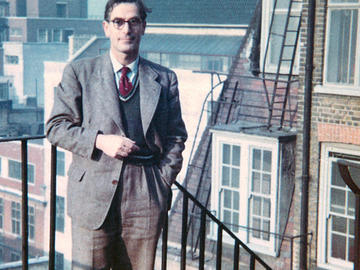 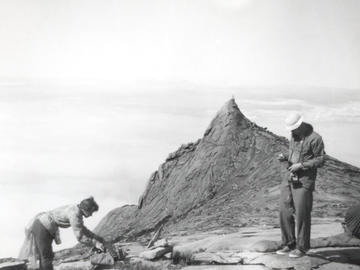 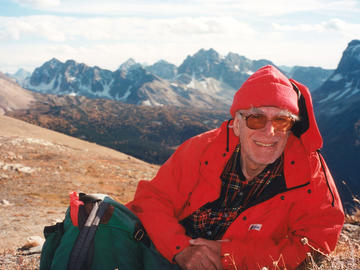 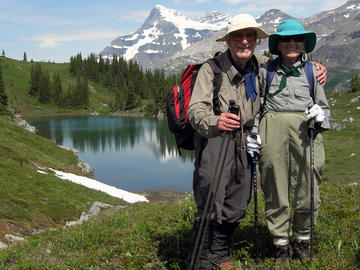 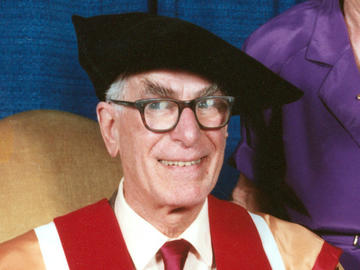 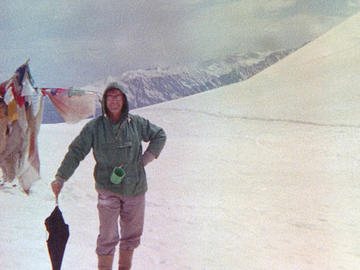 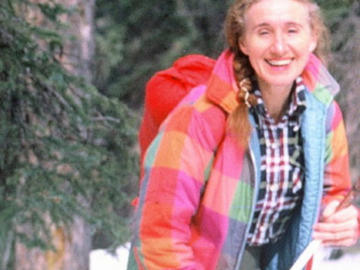 Your memories of Richard

Just to say that in December 2016 I, an unknown outsider, emailed Professor Guy regarding a passage in his "Unsolved Problems in Number Theory" referring to Schiemann on quadratic forms. To quote from my message:

"I am an annuated and very amateur post-doc constructing tessellations on the triangular lattice for number pairs (e,f) with complex number norm e^2 - ef + f^2 where (e,f) are Eisenstein integers. I have found that the notorious Ramanujan-Hardy taxicab number 1729 is the smallest number which is the norm of of four distinct Eisenstein integers, namely (48,23), (47,15), (45,8), (43,3)"

Professor Guy, then 100 years old, replied two days later with some very useful references to sources, which sent me on my way to other authorities in Oxford and Germany.

"...His legacy and influence goes far beyond measure..." (read more)

I was an engineering student in a mathematics course taught by Dr. Richard K Guy in the 1970s.  His quirky brilliant evident passion for mathematics sparked my own life long interest in Mathematics.  I always remember his patient answers to any of my inquiries with a "Let's See".  His legacy and influence goes far beyond measure as true modest greatness does.  His passing leaves a truly great loss.

Professor Guy replied (in the snail mail days) to my undergraduate letter attempting to solve one of the problems in his UPINT book. I hadn't understood the problem properly but he still bothered to reply. An old-school gentleman scholar.

"I first met Richard when he and his wife Louise invited me...(more)

I first met Richard when he and his wife Louise invited me to their home in 2002 in celebration of another successful ACC General Mountaineering Camp. Their ability to build community is like none other I have seen. I am honored to have known them both. And for those who don't know, Richard made possible a new hut in the beautiful Rocky Mountains he and Louise loved so much. The Louise and Richard Guy hut in Yoho National Park. A segment aired on CBC in 2010 and can be viewed here.

"...he always seemed to me from afar to be a perfect gentleman..." (read more)

I regret I didn't have the pleasure of meeting RG in person; he always seemed to me from afar to be a perfect gentleman. I had occasion once (oh, over twenty years ago) to write to request some of his papers, and he very generously sent me a wide selection. Karl Dilcher and I wrote some ten papers together, and Karl was once invited to Calgary to give a talk (22 Oct 2009) on one of them (paper #2 at https://johnbcosgrave.com/publications.php). Afterwards Karl wrote to tell me that Richard had attended, had bombarded him with questions, which continued into the following day. What a man.

I have fond memories of the times my late husband, Ferdl Taxbock (ACMG Mountain Guide), and I shared with Richard and Louise at ACC Mountaineering Camps and events.

"Richard was the most influential person in my professional life..." (read more)

Richard was the most influential person in my professional life. The irony was that I went through undergraduate studies at the University of Calgary without realizing that the author of "Unsolved Problems in Number Theory" actually was at the University of Calgary. That book and its author went on to be the primary inspiration behind MathPickle.com. In 2013 when James Tanton and I hosted Unsolved K-12 at the Banff International Research Station - Richard Guy and Robert Woodrow were there. His witty talk can be googled: "BIRS Unsolved K-12 Richard Guy" Two year later when Neil Sloane and I hosted Integer Sequences K-12 - again my mentor was there - and again he presented with wit and vigour. So many other memories: like when he cooked a full three-course meal for a fan of his whom I had just picked up from the airport. At one Gathering for Gardner Nancy Blachman and I decided to buy and distribute the biography of Richard "Young at Heart" written by Chic Scott. I still have fifteen copies of this brilliant book if anyone would like a copy.

Professor Richard Guy influenced me immensely in what I try to do. Among many memories that are with me, one of them stood out. I was lucky to sit in MS586 office from where I could watch Professor Richard Guy walking from Number 9 bus stop to the Math Sciences building with his ski-poles in the middle of cold winter. This was when he was 102. What a courageous, and dedicated worker!

In a difficult world we live in, we look up to someone who would provide us the encouragement and enthusiasm we periodically need. He is not here but his spirits will be with us for years to come.

I remember Dr. Guy well. i also enjoyed his recreational mathematics with Conway, and Dewdney. When "Uncle Paul" Erdős came to visit UofC, we had some interesting discussions.

Lived to 103? Wow. Really shows the benefit of keeping your mind active.

"Thank you both for your teachings - I will never forget you..." (read more)

I had the pleasure of meeting Richard the first and last time on October 9, 2019. He sat in the front row of a lecture I was giving for the Emeriti Association on Music Therapy. Richard spoke of his love for music, something I had learned from his wife Louise and friend Dr. Carole Lynne Le Navenac many years before. Louise and I spoke in Carole-Lynne's class about how the arts, including movement and music, can help all of us throughout our lifespan. Richard and Louise were mentors to so many of us in this regard. Thank you both for your teachings - I will never forget you.

"I was very happy to have conversations..." (read more)

I was very happy to have conversations at the Emeriti Association sessions, particularly those involving music, as well as the Christmas 2017 celebration of Richard's 100th anniversary. ( I can forward you a picture taken from that event if you wish).  I shared with him how his wife told me that the three things she thought explained their good health in later life: exercise, including cross country skiing, hiking and dancing, plus their parents contributions--good genes. My thoughts and prayers go out to all his family.

In his younger days, Richard was a keen composer of chess endgame studies, and the endgame study columnist of the British Chess Magazine. As one of his successors, I have posted a tribute to him in this capacity on the Orthodox Chess / Endgames page of www.jsbeasley.co.uk.

In 2013, when I was studying at the UofC, the Number Theory group had regular meetings called number noshes. This was the place where we would meet, have our lunch, and chat about our work. This is where I met Prof. Richard Guy. During one of the noshes, he mentioned that he wanted to go to the gardeners' meeting somewhere in Atlanta, but was having trouble purchasing tickets online. So I agreed to help, knowing nothing about Prof. Guy's age. I went to his office and, first of all, noticed that he was using the operating system called Fedora. Unix users would agree that the choice is far from being obvious. Next, I noticed that he was using some browser I never heard about, and whose name I cannot even remember now. This turned out to be the problem: because the browser was non-conventional, switching to Firefox resolved the issue and Expedia worked just fine. So I opened it for him, but Prof. Guy asked me to stay and fill in the slots with details. So I did. I filled in the city of departure (Calgary) and the city of arrival (Atlanta), indicated that this was a return flight, and specified the date Prof. Guy told me. Then comes the time to fill in the details about the traveler, and so I asked him about the date of birth. And then entered: September 30th, 1916.