Postdoctoral Associate, Department of Physics and Astronomy, Faculty of Science

Dr. Sourabh Kumar is a postdoctoral associate in the Department of Physics and Astronomy at the University of Calgary, with an expertise in both theoretical and experimental quantum optics, working in assistant professor Daniel Oblak’s Quantum Cloud (QCloud) Lab.  Dr. Kumar's research primarily focuses on developing quantum technologies for long-distance quantum networks. One can envision a future in which a global network of quantum nodes is connected via quantum channels to form the quantum internet, providing us with unprecedented security and computational power. The quantum nodes will require excellent quantum computational units and long-lived quantum memories. In the QCloud Lab, Dr. Kumar is involved in integrating superconducting qubits (SQs), which are one of the leading candidates for quantum computation, with rare-earth ion doped crystals (REDCs), which have been demonstrated to serve as exceptionally long-lived quantum memories. In addition, he intends to employ REDCs to transduce quantum information from microwave photons, which can directly interface with SQs, to optical photons, which are the best candidates for carrying quantum information over long distances, thus getting closer to the realization of the quantum internet.

Dr. Kumar is a co-founder with assistant professor Danial Oblak of a start-up, Quverse Innovations Inc., and serves as its President and Director. Quverse Innovations Inc. aims to develop and commercialize novel quantum technologies based on matter-photon interface. The industrial arena for quantum technologies is globally growing at a rapid pace, with significant investments from several leading technological companies.

Dr. Kumar is an e2i (Evolve to Innovate) fellow and is involved in the Academic Entrepreneur in Residence (AEIR) program. He has played an instrumental role in recently procuring funding from the Mitacs Accelerate Entrepreneur program, with Innovate Calgary serving as the incubator. These programs aim to help researchers at the university transform their research into practical solutions that can eventually be commercialized.

Dr. Kumar has pursued innovation from an early stage in his academic journey. During his undergraduate studies at the Indian Institute of Technology (IIT) Kharagpur, one of India's highest-ranked technical institutes, he was an integral part of many award-winning student-led innovative robotics projects, such as Unmanned Restaurant System, Museum Security System, and Smart Spy-Bots.

Currently, Dr. Kumar serves as the VP of Operations in the Postdoctoral Association of the University of Calgary (PDAC). He has represented postdocs in several committees, for example, the Environment, Health, and Safety (EHS) Committee, the Safety Improvement Team (SIT), and the Department Head Selection Committee. He has served as an adjudicator in different awards committees, including the UCalgary Teaching Awards, and Graduate and Undergraduate Research Symposiums.

Sourabh enjoys creative writing and has work published in scientific and non-scientific magazines, for example, Optics and Photonics News. He is an avid sportsperson, and after work, can often be found in one of the sports arenas, playing whatever suits the whim of the day. 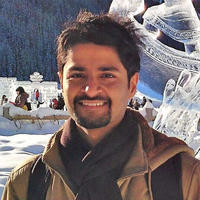 I am grateful to have received the 2022 Innovation Postdoctoral Fellowship. I thank the committee for appreciating the value of our research and encouraging me to pursue innovation. Our quantum-technology potential is being recognized globally, as is evident by the recent decision to establish a Quantum City Centre of Excellence in Calgary. I believe that we have the expertise to develop a vibrant ecosystem for quantum technologies here, which will attract more researchers and industry collaborations, thus contributing to Canada's scientific advancement and economic growth.