If you’ve only got a short distance to go, an electric scooter – or e-scooter – is a quick and convenient way to get to your destination. With a few touches on your phone screen, and a few dollars when you’re done, you can turn your walk into an adventure, whether you’re on your way to work or out for a stroll.

Rachel Mclean, a graduate student in the Department of Computer Science, is graduating at Fall convocation on November 9. Her thesis research was done as part of a multidisciplinary program funded by the Natural Sciences and Engineering Research Council of Canada (NSERC) called the CREATE - IISC (Integrated Infrastructure for Sustainable Cities) focussing on disruptive technologies and sustainable development.

Under the co-supervision of Dr. Carey Williamson, PhD, in the Faculty of Science and Lina Kattan in the Schulich School of Engineering, Mclean analyzed data from The City of Calgary’s shared e-scooter (micromobility) program pilot study in 2019/2020, and built a computer simulation model of e-scooter use in Calgary.

“My goal was to come up with recommendations on how big the fleet size should be for downtown Calgary, and where the City should put scooter parking and battery charging stations to try and see how that affected the program’s ability to meet the demand for trips and the costs of collecting scooters to be recharged,” she explains.

“I used the data to see what the characteristics of the trips were like and how they were distributed.”

Because the e-scooter program is so new, she says, the amount of legislation and general awareness about the best ways to use e-scooters are limited despite their growing popularity.

“What are the most effective ways to use them. What are the biggest concerns, and how can we mitigate them? What parking strategies would be best to try and keep them from cluttering up streets and walkways?

These are going to be things we’ll want to know”

While Mclean says her recommendations to the City remain more general at this point, several key findings stand out.

Her research found that the most common concern expressed about the e-scooters had to do with parking, a common gripe for all kinds of motorists downtown.

“Improperly parked scooters has been one of the biggest concerns for people, and one of the points of resistance, I think, to people wanting the scooters around,” she says.

In 2020, the City implemented “Share and Go Zones”, allocated parking for six to eight e-scooters on a street or sidewalk. The idea was to provide adequate parking and avoid the scooters being left in places blocking foot, bike, or car traffic.

Mclean came up with four different type of tactical strategies for adding new parking locations using a computer simulation of the downtown core. 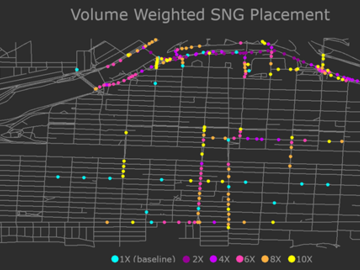 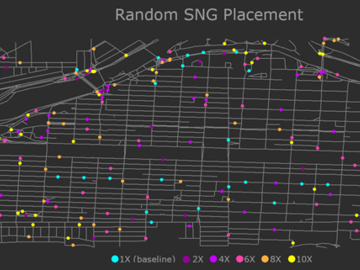 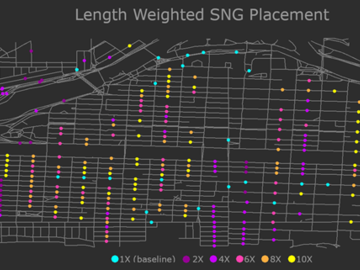 Unsurprisingly, placing them on the streets with the highest traffic volumes is pretty effective, but one of the things that was interesting after running this simulation a couple of times was that placing additional parking on the longer streets gave a more even distribution, which ended up being nicely placed.”

Mclean’s study also found that incentivization could be particularly useful in increasing the benefit of frequent, evenly distributed parking areas if it is able to encourage users to modify their trip by one or two blocks to end at a dedicated parking location.

Similar to how having more frequent, available trash cans or recycling bins can help decrease litter, having many available parking places for e-scooters could help decrease chances of the scooters being parked improperly, and contribute to increasing their popularity as a means of transportation.

“I think that they have the potential to be a great thing to integrate into public transport. It would be interesting to see if the scooters can stick around and gain little bit of traction over the next couple years.”