UCalgary students and researchers share insights into the brain, human and otherwise, at Beakerhead. Mike Giardino, University of Calgary

In the middle of Prince’s Island Park, on a warm sunny morning, a table is set. On it: samples of brains — human and animal alike, all sizes and shapes. Eager children crowd closer to get a look and to perhaps even touch one of the specimens laid out before them.

Across the broad lawn, children scramble to unlock mystery boxes, and in doing so, try to figure out the world of polymers.

The brains? 3D models and models made from various substances. The mystery boxes? A lesson in what gives different types of plastics their properties.

Both exhibits, part of Beakerhead 2019, as the University of Calgary is a sponsor of the annual mashup of science, technology, engineering and art, which just wrapped up this past weekend.

The Beakerhead festival culminated in a Saturday night celebration on Prince’s Island, yet many of the booths were set up earlier in the week during the day, to allow school groups the opportunity to learn more about some of the research work being undertaken at UCalgary.

Marissa Clapson, a PhD candidate in chemistry in the Faculty of Science, and organizer of ChemEscape, agrees.  “Beakerhead is a phenomenal partner. It really gives us the chance to not only show off our skills as scientists, but also as science presenters.”

Check out the video below to learn more about UCalgary and Beakerhead 2019. 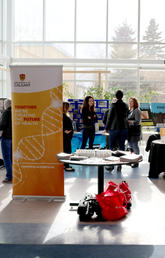 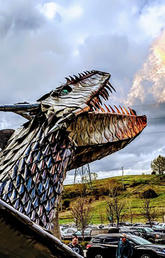 Beakerhead kicks off this week