To say former UCalgary Nursing professor, Dr. Lorraine Wright was surprised when she got the call from the Governor General’s Office this past June is an understatement.

“I thought ‘I don't know anybody in the Governor General's office,’ and then she told me the news and I was stunned,” Wright told Nahlah Ayed of CBC Radio’s The Current on July 1st. “Such an incredible honour.”

The honour that left Wright stunned was that she has been awarded the Order of Canada for her “leadership and contribution to the field of family nursing in Canada and around the world.” Wright is a pioneer in this area, one that most people today would think has always been part of the consideration when looking at a patient’s diagnosis and health-care plan.  But, as Wright points out, for a long time in nursing, the focus was primarily on the individual. The more she engaged in clinical practice with families in various countries, she realized illness suffering is universal and how one copes with illness is influenced by how the family responds to the illness. As well, often the one suffering the most in the family was not the person with the diagnosis, but someone else in the family.

In 1982, Wright established the Family Nursing Unit (FNU) within UCalgary Nursing, a unique outpatient clinic for the treatment and study of families suffering with serious illness, and served as its director for over 20 years. She taught family nursing courses at both the undergraduate and graduate level as a means for the discipline to embrace working with families; the clinic became a place for students to observe her clinical work with families and for Wright to supervise them as they counselled families themselves and developed the particular clinical skills and knowledge necessary to soften illness suffering.

“Over the years, we started to get more requests of people wanting to come and visit our clinic,” Wright explained to Ayed. “And there were so many requests that we started offering what we called a Family Nursing Externship once a year, where people came from around the world to learn about our work. And it was quite thrilling and an honour that they would do that. Next the invitations started coming for me to lecture and do workshops in various parts of the world. Incredible. So off I went. And that's what I've been doing for the last 20 years — trying to spread family nursing globally.”

UCalgary Nursing professor Dr. Nancy Moules worked under the tutelage and mentorship of Wright throughout her master’s and PhD degrees and so was directly influenced by what she calls Wright’s “influential, remarkable and masterful personal and clinical skills.

“Lorraine is truly a visionary and a benevolent teacher; she is compassionate, intelligent, self-sacrificing and caring of others,” explains Moules, who went on to teach alongside her until Wright retired from the University (but not her career).

“She makes everyone in her presence feel acknowledged, accepted and as though they matter. And they do matter to her. I have never met a person who cares as completely about the interests of others and will do anything within her power to make a difference in the lives and suffering of others.”

Moules, together with Associate Professor Emerita Dr. Janice Bell, Dr. Fabie Duhamel and Anne Marie Levac supported the nomination which Dr. Maureen Leahey submitted in 2019. Bell was also the impetus behind the establishment of a scholarship in Family Nursing in Wright’s name.

Wright has authored more than 60 articles and book chapters, co-authored two books; co-edited four books and solo authored two books. She has currently visited 82 countries and has given over 300 presentations at national and international nursing, family health and family therapy conferences.

What’s left for Wright to accomplish now that she has received Canada’s top civilian recognition? “Well, I have visited 82 countries and my goal is to visit 100 to learn more about illness suffering, illness beliefs and families and offer that knowledge to my health-care professional colleagues,” she said to Aya. “So I’ve got to keep moving; I’ve got to keep going.”

The Order of Canada represents outstanding achievement, dedication to the community and service to the nation. Since the creation of the Order in 1967, more than 6,000 deserving people have been appointed all with varying backgrounds: Wright’s is the first for UCalgary Faculty of Nursing.

To listen to and/or read Lorraine Wright’s interview with CBC, click below. 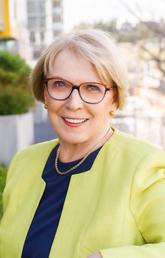 In the News: Government of Canada

Dr. Lorraine Wright named one of the Order of Canada appointees for her contributions to family nursing in Canada