A minute to ask a single question, and a lifetime to recall the experience.

For University of Calgary student Faith Moghaddami, it was a memory-making moment on Wednesday morning, as one of a handful of Canadian students chosen to ask Ukraine President Volodymyr Zelenskyy a question over a live video.

“With the availability of social media, much of the war has become publicly accessible unlike ever before. How do you believe the Internet has shaped how the world perceives the war on Ukraine?” asked the UCalgary nursing student, to which the Ukrainian president replied:

“For us, the Internet is a kind of weapon through which we can show what is going on in Ukraine, who conquered us, how many victims and casualties we have and what has this aggressive Russian operation left behind.

“Information can sometimes give a bigger blow than some other types of weapon.”

Zelenskyy was speaking via an interactive video link to post-secondary schools across Canada, in an event organized by the University of Toronto’s Munk School of Global Affairs & Public Policy, in support of the war-ravaged European nation. Watch his full speech.

Nearly 200 UCalgary students inside a Taylor Institute for Teaching and Learning auditorium joined post-secondary audiences across Canada to hear Zelenskyy’s plea for more international support in his country’s attempts to repeal the four-month old Russian invasion.

He asked students across Canada to not grow weary in their support:

Everyone becomes weary of war. So by your actions in social media, in your communication with friends, going out to rallies in your countries and supporting Ukraine, with your actions, please, don’t allow anyone, somewhere on the hierarchy of bureaucratic corridors to forget about what’s going on in Ukraine, to forget about war.

The charismatic president, who has become the international face of Ukraine’s struggle, fielded questions from a handful of universities, including UToronto, UCalgary, University of Saskatchewan, Université de Montréal and University of Alberta, with his responses ranging from humorous, to stark and serious.

At one point, he compared Ukraine’s war against Russia to the Toronto Raptor’s NBA championship season, “when you win when no one is expecting you to win.”

For Moghaddami, whose mother is a refugee from Iran, the opportunity to speak with the president directly left a deep impression.

“He painted such a clear picture of what is happening in Ukraine. I’ll never forget this moment,” says Moghaddami, who worked with Yazidi refugees during her nursing placement in 2021. 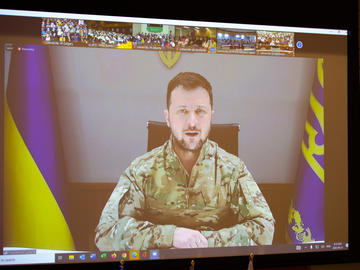 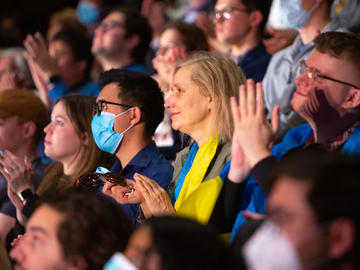 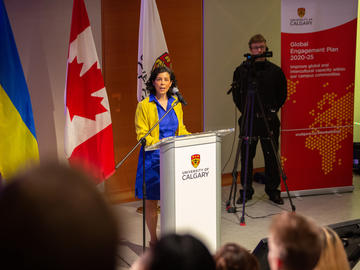 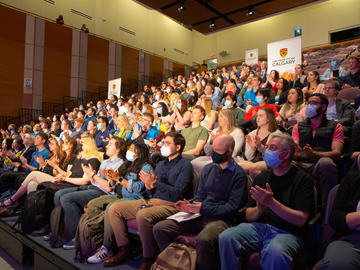 For Canada, and for Alberta in particular, Dueck says the relationship with Ukraine is a long-standing and important one. Students care about supporting the values of democracy and the rule of law in Ukraine, and are also set to welcome many of their peers who have been displaced by the conflict.

“The Russia-Ukraine war is reshaping geopolitical relationships as we speak, and our students will remember their discussion here for a lifetime.”

International students face many challenges studying in Calgary which may include language barriers, cultural differences, loneliness, and anxiety.  In addition, their home country may be in a state of crisis which can create additional financial challenges and concern for loved ones. The International Student Conflict Support fund has been created to assist these international students who unexpectedly need financial assistance to support their tuition and other costs due to conflict in their home country. 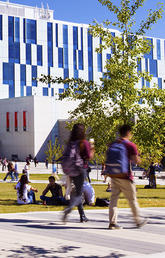 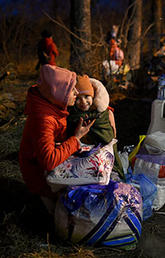 In the News: Conversation Canada

How to talk to children about the invasion of Ukraine, and why those conversations are important 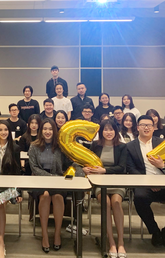 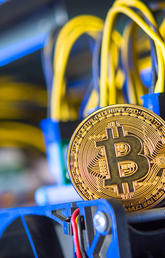